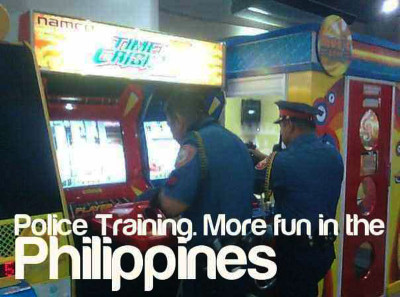 It is in the international media and another “more fun” occurrence. The Bullet Scam at the Manila Airport. Now as we all know that many here don’t miss out any chance to steal, extort or “make” a peso or two, planting bullets is something new on my list.
Then again, below is also an example that people here are really often extremely ignorant, when it comes to laws and regulation.

A bullet was also found inside the bag of 46-year-old dental assistant Rey Salado, who was bound for Cagayan de Oro for the burial of his father.
However, although admitting that ammunition was indeed his possession, Salado said he did not intend to bring it with him.
“Souvenir po sa akin ‘yan galing Baguio, alam ko namang bawal, hindi ko lang natanggal sa bagahe,” Salgado told Radyo Inquirer 990AM.
(That is a souvenir for me from Baguio, I know that it is prohibited, I was just not able to remove it from my baggage.) Source

This is not a single case. Here is what a friend of mine wrote on a discussion board:

I took a girl to palawan years ago and she kept.a bullet in her purse as a good luck thing or to warn off evil spirits or some shit……she forgot about it and we got pulled up in Manila. ….but they were cool about it and just said don’t do it again.

So a bullet is a good luck thing, a souvenir, or a moneymaker. I am sure a short research brings many cases to the top where somebody “forgot”the souvenir accidentally. Well, if this is the case, clean up tour freggin’ bag, you carry too much shit !!! The first guy is for me even a better example how people here think. What he says is basically, “I knew I have it, but I just gave it a try.” And no, this are no few stupid examples, like many might say. This is “the way we do it here, if you don’t like, go home to your country”.

I invite everybody for a stroll at the Dumaguete Boulevard. We look at hundred motorbikes and on minimum 95 we will see something which is against the regulations. I talk about the parked ones, not even having a look at the running ones for lights, or helmet, or texting, or drunk. Or we check for littering, or begging, or or or.

I am talking about the total average and “normal” behavior. Of course everybody will blame the corrupt politicians why the Philippines don’t develop anywhere. Finger-Pointing is after texting the No2 recreational activity here. However, it is the shortcut and cheating attitude of  the overwhelming part of the population, which makes an improvement of any kind totally impossible.

As a parent of two kids I really have a lot of work to keep them on track. It is a constant fight against idiocracy taught in schools here, and I probably will lose the fight.

Anyway, I am off to the airport, gonna open a business for cling-film, I will be millionaire by Christmas.