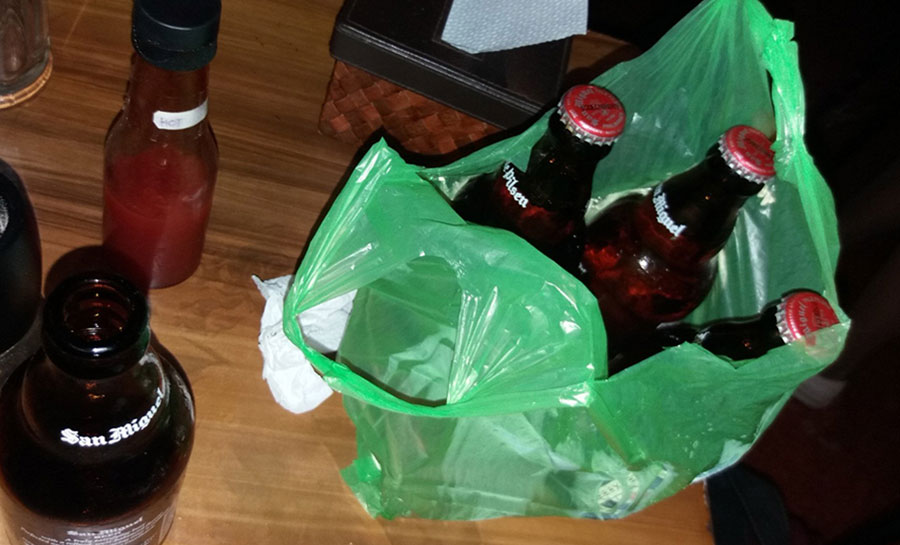 After 2 years or so and a not so good experience at this place, my missus asked to give it another chance. Back then their Gnocchi was the only dish I really liked. However, it appeared that the cook there (certainly can’t call it chef) is on the lazy side of the employee scale, as miraculously they “just served the last portion” and are out of stock. I even called Pasta King multiple times. Even 30 minutes after opening: “sorry, out of stock”.

Finally, we were lucky and rumors had it that they are actually having a portion or two. So, we went there on a Saturday evening around 6:30 pm. Like always the place is pretty dead, an indicator that even the locals figured out that this place is as much Italian as me being a Syrian immigrant. Surprisingly they were NOT “out of stock” of gnocchi. However, we needed to check what else we dare to try and to have a look at the menu. So we ordered 2 San Miguel Pilsen to start and have a closer look if anything other than getting really pricey has changed. But no, it just got more expensive. With the main order of some soup, Gnocchi, and pizza I ordered another SMB.

The waitress came back a few minutes later to let me know, sorry out of stock no beer anymore. Now, having 3 waitresses staying around with 2 customers in the middle of the city where ALL shops are still open and no more than 1 – 5 minutes walking distance away, that should be no issue. At least that is what one may assume. But, being badly managed and guided by some people who can tell great stories how great they are, but actually never achieved much in their life, of course, nobody would move their ass.

So, I went out and returned 6 minutes later with 4 ice cold beer. Paid 35Php a piece at the shop. The fake Italian restaurant sells it for 59 Peso. That would be a profit of 96 Peso for 6 Minutes work. Hey, I would do that job for a living, but not lazy Pasta King staff. About the food… overpriced. Microwaved soup, Pizza was so-so, for 399 pesos I was expecting more. Throwing a truckload of arugula on it makes a nice color but does not cover up the greediness with all other toppings. Gnocchi, well, blame the local potatoes for being a bit on the rubber side. However, the beer was really good and ice-cold.
I somehow was waiting for a kind of manager telling me that I can’t do that or that I have to pay a corkage fee. Man, I was ready to fold that guy together like a Filipino Nipa Hut in a Typhoon. But I guess the manager was absent if there is even one, or to busy playing with his phone, or simply knew it would be an unwise decision to approach me.

You can pass their place whenever you want, it always appears empty. Sometimes you can see a table of 6 of 8 gathering around a single Pizza and 4-6 staff members playing with their phone, but that is as busy as it can get. However, it appears I am not the only person who had that experience that the staff is just lazy recently. Here is a screenshot from Tripadvisor talking about their delivery service.

The poster comes from East Europe, so his English might be as bad as mine. However, I guess it is pretty clear what he says. It pretty much falls in line with the complete unwillingness of the Pasta King staff to do their job. Then again, living here long enough, it is no secret that the working attitude and a commitment to do the job what you actually get paid for is not existing.

Bottom line, it can’t get much lower. I still give 2 points out of 10. 0.5 for WiFi, 0.5 for the nice rear end of one waitress and 0.5 for the pepper mill. That makes it a total 1.5 which is rounded up to 2 points, just being nice a few days before Christmas.