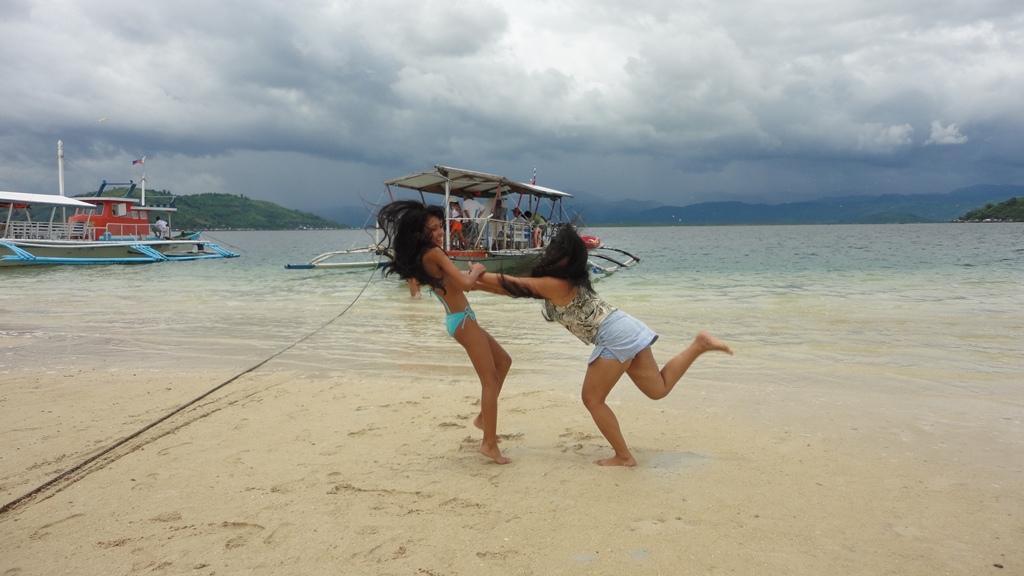 My little monster had birthday on Saturday and I was thinking, like at each whatever-celebration, where one has to give presents, what to give her. Earlier that week I followed several discussions on dumagueteinfo.com about outstanding tourist destinations in Negros, that Bais is basically worthier than any other place in the world and a guy who is in Valencia, writes advertising for Bais on the Forum mentioned above but  stated:

FYI my mother is from Bais so I know the city well, but I live and work in Valencia. You will find me here in Valencia town square most Monday mornings if you want to meet me. You can’t miss me. Just mention my callsign.

As there was an additional scheduled brownout on Sunday, I was thinking that a Dolphin trip would be fun for the whole family. It’s been a while since I have been there, and my little minsters have never been to Bais anyway. Coincidentally one board member had the same thought to escape the brownout and organized a boat for a trip to the dolphins. 12 guys and girls met at 6:30 in the morning at the “Golden Archers” downtown Dumaguete and after a Breakfast we swung our butts on the bikes to head towards Bais Where we met our tour guide at the market building. By the Way, as nice and impressive and modern the market building is, it appears to me like a big waste of taxpayers’ money. There is much more important stuff which could be fixed before having a “monument” like that. However, it is very clean and well taken care of, including the CR, which is not normal for most communities in the PI, well done !!! We met our guide at the market parking lot and “coincidentally” it is the same guy who lives and works in Valencia, who only has a mother in Bais. He obviously got wind that Larry organizes a trip and “suddenly” had a weekend-job as tourist guide in another city.

It need to be said, that he did a great job and was very helpful in any possible way! Compliment from my side, from my little family and I assume from the others of the crowd. However, that is not what can be expected from a “regular” tour-guide in this region, which are all nice but many don’t have the resources and skills (language or organizing) to do a job like that. After some beer was organized we made it to the boat (some sacks of gravel on the way would be nice though). With a typhoon east of the Philippines, the sun was hiding behind clouds but the Tanon strait was (like usually this time of the year) calm and we were soon past the Sandbar in the open water. There were many dolphins around and it is just great to see them jumping around, playing with the boat and seeing the excitement in my families eyes. After that we headed to the Sandbar, which was due to incoming water pretty small, nevertheless, it was simply a great time and place just to hang out, having a beer and a beer and a beer, some picture taking and some Kayaking for the Kids. Occasionally the sun made also her way through some holes in the dark clouds and I tried to take some pictures of that kind of weird combination with the sunny spots and the dark grey rainclouds in the back. And soon the storm hit us and we needed to head back to the pier to avoid worse conditions. Of the boat, my pretty sleepy little monsters took advantage to ride back to Dumaguete in the only car of the group, while the rest of us drove through the storm. Well, everybody can drive in good conditions. I like to drive in the rain, as almost nobody is on the road and at the end it is still warm here in the Philippines. At home everybody had a hot shower and was pretty tired. All in all a great day with some nice folks, sexy ladies, some cold beer, playful dolphins and most important: My two Happy Monsters! So, Bais – Dolphin Watching and Sandbar in Manjuyod or Brownout in Dumaguete? you’ll need to judge yourself…