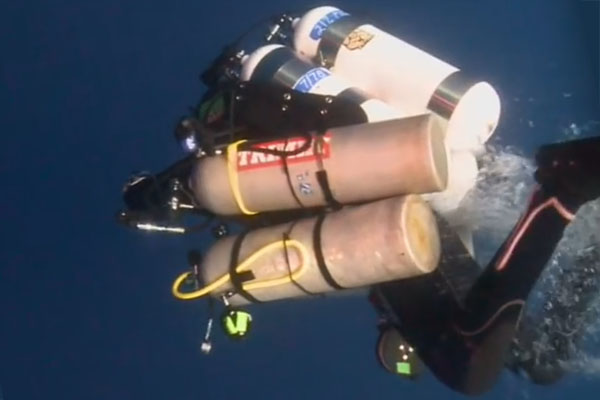 Dr. Guy Garman – also known as “Doc Deep” did not return from his world record attempt to dive to a depth of 1,200 feet (365 meters) in the waters of St. Croix, US Virgin Islands. 38 minutes after he descended he was supposed to be on his way back and meet his deep support divers in about 360 feet (110 meters) where he should have made his first stop. He never made it there.

My heartfelt sympathy for the family and friends of Dr. Guy Garman

While there are no further details about the death of Dr. Guy Garman, there are many questions going around, not only on many scuba forums, also in my head. Now one obvious question is:

Hard to say, he “only” had 595 dives experience and was diving for about 4 years. According to different sources he had 35 dives beyond 150 meter with his deepest dive being 246m in April 2015.

The actual world record holder Ahmed Gabr started diving in 1990 was US combat diver, is PADI IDCS instructor, TDI and SDI instructor trainer and ERDI instructor trainer. He trains public safety organisations like police, fire departments in search and rescue tecniques and everything else which need ti be known about the wet environment. He started his research 2008 about how deep a human body actually can go. He started his training in 2010 and finally made the successful world record attempt on September 18, 2014, hitting 332.4 meters.

So only the prep and the training of Ahmed Gabr was longer and certainly more intensive than the whole dive experience of Dr. Guy Garman.

I am not saying that it is not possible to do what Doc Deep intended to do, what I say is that the mental and physical preparations of Ahmed Gabr for that one dive was longer than the whole diving career of Guy Gaman.

The record holder before was Nuno Gomez who was is an icon in the world of technical diving for over 20 years and is part of the history and interesting story behind David Shaws deadly dive in Bushman’s Hole in South Africa back in 2004. (you can read the story here).

Now it is to each reader to build an opinion. Going to that kind of depth is pushing the limit beyond any known factor. (If it would be known, it would not be a record, right).

Body of Dr. Guy Gaman not recovered yet

Now despite the support team and doctors on the site one must be allowed the question what hinders the team to get Dr. Guy Gaman back to the surface. According to different sources he is supposed to be somehow attached to a descent line, but the team is not able to pull it up again. I do understand that there are some kilos of weight on there, however in a location like that one would expect that there are at least coast guards somewhere with a hinge which could lift that kind of weight. I also don’t think it would be a problem with a number of lift bags. I actually believe they just don’t want the body to surface as long there is any kind of media attention for many reasons. A bloated dead body with a lot of compressed gas in the body tissues brought to the surface from 350 meter would feed a lot of media for a few days.

If this kind of record hunting makes sense or not is also not for me to decide. Each individual with the intention to try something like that needs to decide that for him/herself.

Nowadays I see denial and delusion in many “extreme” activities. In every sport are men and women trying to get faster, higher, deeper etc. As long they don’t put anybody or anything (like nature) else into danger they can do whatever they want. It is their risk and responsibility. The second they have people depending on them like a family my opinion about taking risks is slightly different.