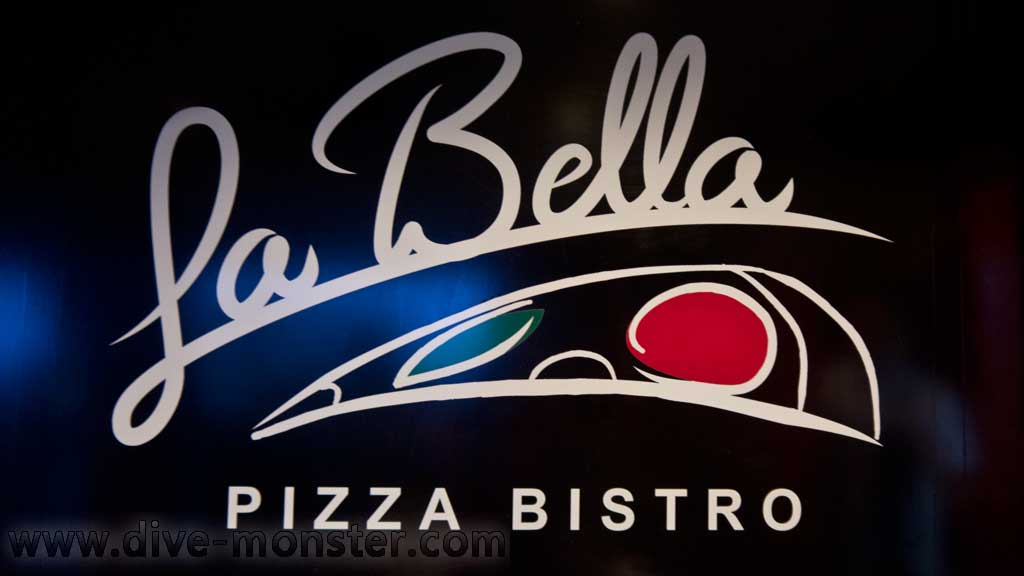 Italian Pizza at the Boulevard in, that was what we were hoping for when entering La Bella Pizza Bistro in Dumaguete. It appears to be a franchise of the Cebu’s Origin “La Bella Napoli”. The Bistro is just across Bethel Guest House at the southern part of the boulevard. The building was some years empty and after a few month renovations the new Pizza Bistro was announced already a few months back. The spacious veranda offers a nice view of the boulevard. However, due to the stinking trucks and trikes blowing out black poisonous fumes in “smoke-free” Dumaguete we decided to get inside. By now the place is closed forever. A spanish kind of Tapas Hang Out Resto Bar has replaced the dreadful Pizza place. Read my critical analysis of Allegre Dos here.

While it was obvious that the intention of the interior was to create a kind of modern Bistro atmosphere, it rather turned out to be a mix of “We stuff everything we can find cheap at Unitops onto the walls” and “We have an old water color painting of my 5 year old, let’s put it in a frame”. Lamps on the wall just don’t fit to those hanging from the ceiling, no table cloths but cheap thin cut-in-half paper tissues, and the list would go on..

Upon entering we were welcomed friendly, seated on a table for four and handed the menu. Staff was trying hard to do everything correct and with a bit more experience may get the kind of easy professionalism without appearing too stiff.

The menu is rather small. A few breakfast options, 10 different Pizza in small and large, four pasta dishes, drinks and desserts. I miss somehow the typical Bistro food, especially for an Italian style Bistro, like Pizza-bread, Calamari or Bruschetta and some more nice bistro finger food. Then again, I should be used to the fact in Dumaguete that whatever you read on a sign does not mean that it is actually what you should expect. Anyway, the choice is big enough to find something for everybody.

We ordered two Pizza (large Diabola & small Capricciosa <– has typo in the menu, but let’s not be too picky) and some soft-drinks. It took about 15 minutes until our Pizza arrived. They are about the size one would expect and look pretty yummy on the first view. On a second look you recognize that the topings are pretty uneven, like one slice have 20 pieces of olives the other has none, zero, zilch. Well, that can happen, so nothing to be really bothered. The dough looks perfectly cooked and is really good, crunchy and just right for a thin crusted Pizza, well done. Having said this, here is also where the tasty part ends. Not that the rest was not good, it was simply bland and totally tasteless. Cheap Mozzarella (one thing I always criticize at Hayahay, they switch from the good Mozarella to the cheap tasteless one instead of adjusting the price), the tomato base out of a can without any seasoning. The Diabola had some weird junks of brown something on it, which was certainly no Italian Sausage, the Pepperoni on the Capricciosa was surely also a local product with a pepperoni label glued on it, but as much a pepperoni as I am a black African, and the cooked ham appeared like that really yucky “pure food” like square pack of processed something. There was no Pizza taste whatsoever, no herbs like Oregano, Basil or Thyme in the tomato paste, the final sprinkle of some olive oil, just all freshness which are the signature of a good Italian pizza was just not there.


The positive part was that all cheap ingredients were so tasteless that it didn’t really disturb or interfere with the taste of the dough. The second positive part was the dried chili-pepper mix, which were handed to us to give our 2 Pizza at least some taste. The hot sauce they have (no Tabasco) is really disgusting and shouldn’t even be offered. I certainly will give it another try in a few months, maybe we were just unlucky, but seeing and tasting the ingredients used, I somehow have the feeling that it is one of the typical “cutting corners” places. Good toppings for pizza are available and not too expensive to order from Manila and/or Davao. Fresh herbs grow everywhere in our region.

Calling the stuff at La Bella Pizza “Authentic Italian Pizza” is like calling “Tejero” in Valencia the Sentosa of the Philippines (which they actually did in an advertising), both is totally nonsense and simply wrong. At least La Bella Pizza in Dumaguete can adjust. If they do so, it can be a great food option. Otherwise it simply will be another entry on the already very long “missed opportunity” list of local restaurants. Bottom-line, I simply wish La Bella Pizza Bistro get their act together and can turn it around to produce a Pizza the Rizal Boulevard in Dumaguete its population and all visitors deserve…. Hmmm or maybe below average is what we deserve here? I really don’t hope so !!!