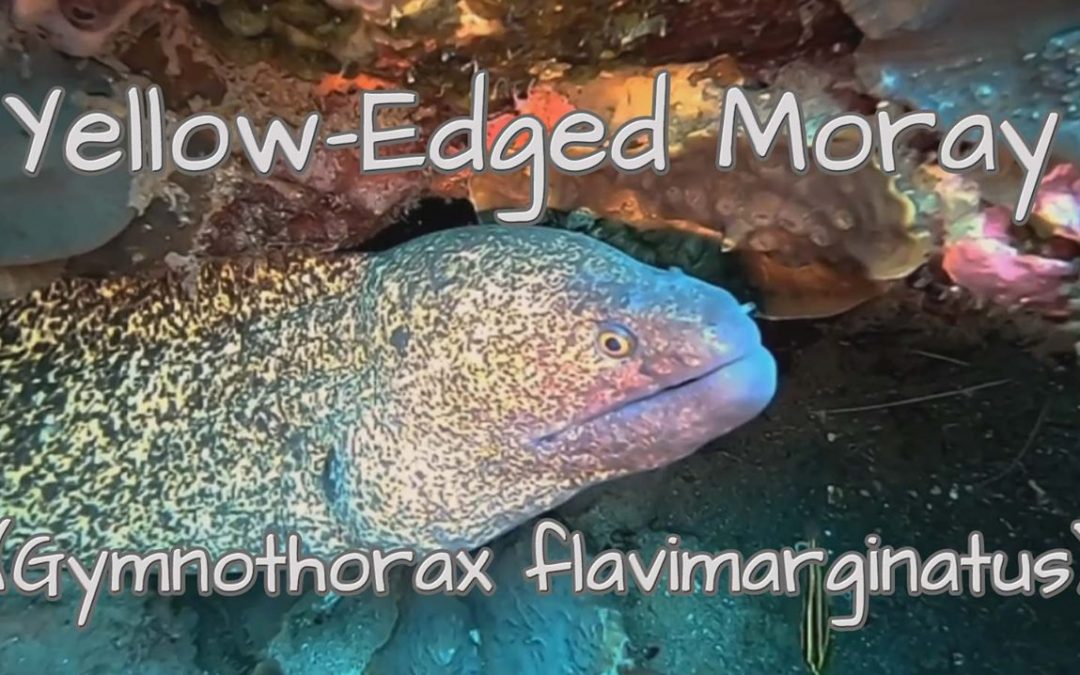 is a great country to go diving all year round. Many will find both big and small things in the ocean. One day during the Dive Monsters’ dive in Dauin, we say a “peeping Tom” on a coral. The moral eel perked up head to see if the reef was safe…well..not from us and the camera!!!

The yellow edged moray eel is a moray eel of the family Muraenidae. They are mostly found in the Indo-Pacific Oceans at depths to 495 ft. (150 m). It can reach a length is up to 7.87 feet or 240 cm. This moray eel was recently identified as a natural predator of the lionfish Pterois miles in its native habitat in the Red Sea. The iris is a yellow or orange color. There is a black blotch in the gill area. They do not have pectoral or pelvic fins and the dorsal fin runs the length of the body. They grow up to 2.4 meters in length and the eel in the video below is about that size.

The yellow edged moray eel is characterized by its dark brown color with irregular yellow markings. The head is large and it has fairly long rear facing teeth for gripping prey. On older specimens the head usually appears darker during the day but at night this darker coloration seems to lighten. On the center of the roof of the mouth there is an additional large tooth, sometimes two. This extra row of teeth can be seen in the image below and these teeth are far larger than the outer teeth. 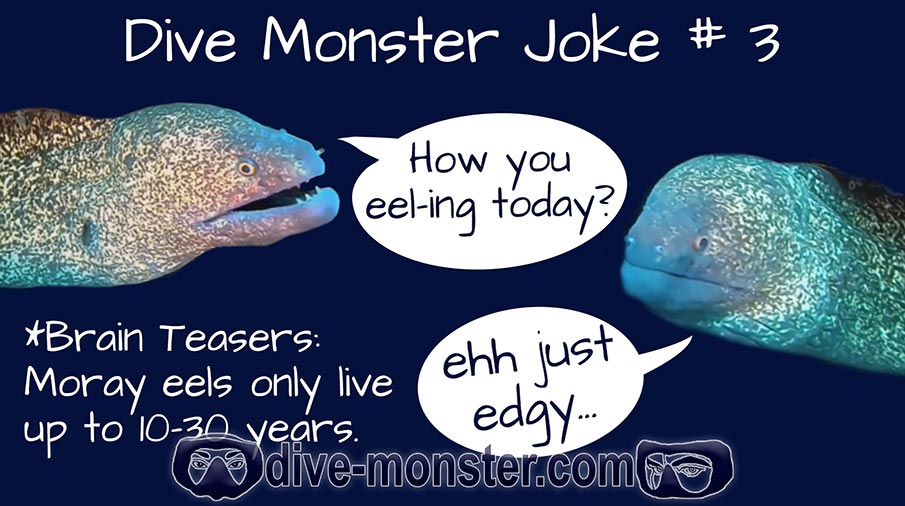 The  moray eel is meat-eater or a carnivorous (just like how the Dive Monsters Eat). It likes to hunt its food at night. They feed mainly on fish and crustaceans. As with most other morays they will probably feed on carrion if the opportunity presents its self. They do tend to open and close their mouth all the time. This is not usually a threat. However, do not get too close. Just like any other living creature, when they can attack. Some researchers also speculate that moray eels contain toxins in their mouths and are poisonous.

Morays secrete mucus over their scale less skin, which in some species contains toxins. They have a thick skin and a large number of cells that secrete mucus epidermis. Moray eels have proportionately small circular gills, located on posterior of the mouth. Moray eels constantly open and close their mouths to facilitate sufficient water flow over their gills. In general, the opening and closing of the mouth is not threatening behavior but one should not approach too closely. They will bite if they feel threatened.

The yellow edged moray eel is found across the Indian ocean and in the Pacific. Moray eels have a second set of toothed jaws in their throat called pharyngeal jaws. When feeding, morays latch onto the prey with their outer jaws. They then push their pharyngeal jaws, which are set back in the pharynx, forward into the mouth. These jaws then grasp the prey and pull it back into the stomach. Moray eels are the only fish that use pharyngeal jaws to capture prey. Their main hunting tool is their excellent sense of smell which makes up for their poor eyesight.

Studies have shown hermaphroditism in morays, some being sequential and others synchronous which can reproduce with either sex. Courtship usually occurs when water temperatures are high. After posturing to each other they wrap their bodies around each other and simultaneously release sperm. And that’s how they make baby eels! Watch the video of this yellow edged moray hiding in the coral rocks.